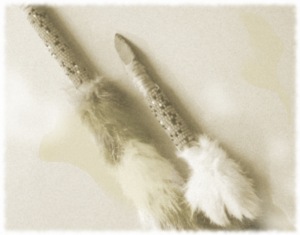 Click Here for Part 1: In Which Billy Bob Finds his Journey Interrupted

Click Here for Part 2: Wherein we meet Arrowheart and One Tree

If he could take illness from one and give it to another, it was the first he’d heard of it. He was young, and according to his sibling angels, peculiar. No one had mentioned this particular skill, but he had not yet met Brother Owl and knew nothing of his rules. He had no doubt that Grandfather Death, with his black robes and scythe, could do it. It was doubtful, however, that he would interfere in the work of a plague or death angel, nor would he approve of Billy Bob impersonating Brother Owl or interfering.

Her shoulders sagged and she sat down hard, burying her face in her hands. “There is no one, as you know too well! My husband died in battle with another band. His father and mother were killed by white raiders and my only sister was carried off by them. My band calls me cursed. My family is nearly gone. I have just One Tree.” Her eyes glittered with unshed tears in the firelight. “One of his uncles must take him in, even if they did not want the burden of a second wife and a nephew before. He was strong and smart before the White Man’s sickness took root in him.”

“You could bear more children,” Billy Bob said. She was young and attractive, by Comanche or Anglo standards. It was a mystery to him why she hadn’t found another husband. He looked her over again, and she felt the question in his gaze.

“Even were I not cursed, I am not good at wifely chores. My beadwork is bad. My jerky is hard. The hides I tan, not supple. I’m good at hunting, and at haggling with traders. And I am cursed. Only ghosts will live in my lodge, if One Tree dies. No one will miss me, Brother Owl.”

“Cursed? What kind of foolish talk is this?”

“Death follows me everywhere. No offense, Brother Owl, but you are a strong curse.” She turned back to One Tree, who called for her with a piteous little mewling sound.

Muttering under his breath, he slipped out of the wikkiup and went in search of more dung and perhaps a bit of wood. The night wind hit him like a wall of needles, pushing chill through his duster as though it were no more than shirtsleeves. He was glad for his superior night vision as he worked his way along the frozen bank. Only when his pockets were full of dung and his arms full of sticks and one fine bit of driftwood did he return to the wikkiup.

Arrowheart looked up from sharpening an arrowhead. “I’m almost out of shot,” she replied to his unasked question, her eyes flicking to her long gun against the wall, to his empty gun belt, and then back to her work. “I must go out at first light and shoot a fine rabbit,” she said, “and cook a fine stew so that One Tree may get well from it after I am gone.”

“Arrowheart.” He knelt beside her, wood tumbling from his arms. He put his hands on her shoulders.

“You can take him to his uncle. Oha Esi, my horse, will show you the way,” she continued, speaking over him, refusing to meet his eyes.

“Arrowheart.” He gave her a little shake. “It’s too late.”

She bowed her head over the arrow and whetstone in her lap, revealing nothing but the red painted part in her hair. Slowly, she turned her head towards the buffalo robe bed where her lifeless son lay. Brother Owl had spirited away the child while Billy Bob gathered fuel and Arrowheart worked.